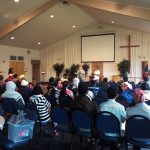 According to bhutaneserefugees.com, in the 1980’s the kingdom of Bhutan took a series of measures that discriminated against a section of its people. The culmination was the mass exile of one sixth of the population in the early 1990s. Bhutan has generated one of the highest numbers of refugees in the world in proportion to its population. Since 2008 a resettlement program has seen over 100,000 Bhutanese refugees move from camps to start new lives in other countries, approximately 85,000 in the United States.

It is estimated that the Bhutanese population in Ohio is close to 15,000. Approximately 99% of these individuals are on Medicaid.

The Asian Community Alliance in Ohio provides culturally sensitive programs and services to empower and strengthen family & community through awareness, collaboration & advocacy and has been working with this population for years. The Alliance recently identified a need in the Bhutanese population related to education on The Affordable Care Act and Medicaid and approached Ohio Family 2 Family to provide this information.

Last October, Ohio Family 2 Family invited the Bhutanese population to one event on Affordable Care Act and Medicaid education and one event where they could actually get enrolled in Medicaid. With the help of interpretive services, about 80 people attended one of the two events. Attendees were very receptive to the information, asked questions and greatly benefited from the services.

While there are still a number of challenges to overcome in assisting this population (language barriers, transportation, etc.), this was a step in the right direction. The Asian Community Alliance and Ohio Family 2 Family continue to provide support to the Bhutanese population in Ohio on disability related issues and Medicaid.